Why is Thailand known worldwide as the "Land of Smiles"? When you visit Thailand, you will notice immediately that Thai people put on a smile in all situations of life. Even though because of modern pressures this smile is slightly fading, especially among the city population, it is still an ever present feature of Thai culture.

This smile can be a sign of friendliness and good will, an attempt to instill confidence in another person or to appease someone in a confrontation, or it may be an expression of hope to camouflage one's own insecurity in an embarrassing situation. Then there is the smile when making a request or to show one's respect or to appear less blunt when denying a request. Even though foreigners may find this difficult to understand, the Thai people's smile makes the daily contact with them extremely pleasant. 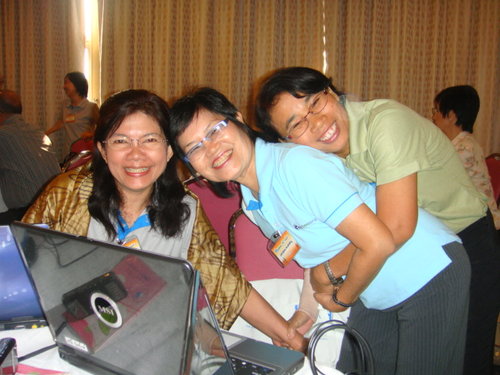 The famous smile is an ever present feature of Thai culture

Today in 2009 there are around 66 million people living in Thailand. The life expectancy is about 69 years. In 1960 it was only 52 years. Population growth, which is at present 0.7% p/a, has in recent years slowed down considerably. Especially in rural areas around 30% of all people still live below the poverty line. Parents endeavour to have many children, as they are in many cases the only support they`ll have in their old age. The urbanization with the widening social and political divide that comes with it, cannot be held back. Cities and tourism centres, and of course the huge capital Bangkok, have a magnetic effect on the young and the often unemployed people of the rural areas. Their dream of a better life, however, often leads to miserable jobs in factories and brothels.

Apart from Bangkok with its estimated population of 14 million people there is no other city in the country that has a million or more inhabitants. Just under 80% of the total population are Thais who emigrated over the course of several centuries from the Chinese province of Yunnan.

Several ethnic minorities live mainly in either the northern or the southern provinces of the country. Yala, Narathiwat and Satun in the south, for example, are the home of islamic Malays, who constitute 80% of the local population. In this region several guerilla groups fight for greater autonomy or even total independence from Thailand. Other minorities live in the north. They are often stateless people who work illegally to support themselves. They are certainly the most pitiful of all inhabitants of the country.

An economically influential minority at the other end of the social scale are the Thais of Chinese origin. In the time from the beginning of the 18th till the middle of the 20th century, about 4 million Chinese fled their homeland because of its political turmoil. A study conducted by Thammasat University has revealed that 63 out of a 100 of the largest industrial companies of the country are controlled by ethnic Chinese. Furthermore, 23 out of the 25 most influential industry leaders are of Chinese origin.

In rural areas, an estimated 30% of the population still lives below the poverty line

About 94% of all Thais are Buddhists, 4% are Muslims and 2% are Christians or belong to some other denominations. It is probably the influence of Buddhism that contributes to the easy and relaxed way of life of the Thai people. Their ambitions and their work ethos are rather limited. They always seem to be in a happy mood and would never pass up an opportunity to enjoy themselves. The political battles of recent times are very foreign to the peace loving Thai people and the majority of them feel very upset about the situation. A great measure of tolerance has for centuries and to this very day enabled all the different inhabitants of this country to live in peace and harmony, and has allowed foreigners of all religions and ethnic backgrounds to live their lives according to their own beliefs and cultures.